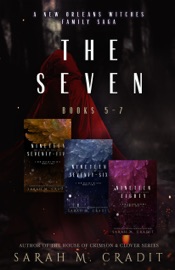 The Seventies. New Orleans. The seven Deschanel siblings live with their long-suffering mother in an historic Garden District mansion. Each of them unique. Each of them born with a gift. In some cases, a gift they wish they could give back.

When August Deschanel died, he left his wife, Irish Colleen, with more than seven children to raise. She inherited a job she was never prepared for: bringing up his heirs in a world she doesn't understand. She’d never seen true magic, not before marrying into the most prominent—and mysterious—family in New Orleans. Now, she can’t escape it.

Her youngest, a prophet, predicted the death of one of their own in 1970, and the tragedies didn’t end there. As the remaining six Deschanel children head into their futures, some will struggle to leave the past behind... while others shrink in terror from what lays ahead.

Dive into the last three books of The Seven in this exclusive collection.

Series List
The House of Crimson & Clover Series: Dive into the secretive, ancient, powerful world of the Deschanels & Sullivans.
The Midnight Dynasty Series: There's no place like home.
Vampires of the Merovingi Series: From the ashes of the sorcerer kings rose an empire.
The Seven Series: Seven siblings. Seven years. Seven spellbinding novels.